Skip to content
Clear Lines on Audit and Risk > Repeatable risk events don’t have a ‘likelihood’ > Likelihood of a future event count within a range, from a history of events

Know the likelihood of any number of risk events next year, when you have limited history of those events.

Finding the likelihood of a future event count within a range, from long-term event frequency was a lot of fun, obviously. But now things get serious.

In real-world risk assessment, you never know the long-term event frequency with certainty or precision. You may have to rely on history within your enterprise, or on history from elsewhere in your industry. Either way, you will get only a general idea of the long-term frequency with which the event type occurs, even from a meticulously complete history.

There are three stages to estimating the likelihood of an event count within a given range over a future time interval, starting from a history of events.

The first stage is estimating the long-term frequency from the history. This first stage results in a continuous distribution of possible frequencies, with varying likelihoods.

In the third stage, you set a range of interest for the future time interval event count, then calculate a likelihood an event count within that range. This stage can be repeated for any number of ranges of interest. Your ‘range of interest’ is usually the range of event counts considered to have a particular consequence for enterprise objectives.

If all that sounds terribly complicated, it is. Especially if you want to understand and use the underlying formulae.

The likelihood function is defined as a function of the long-term frequency, with the observed number of historical events regarded as given, which it is.

The symbol ≅ means ‘is defined as’ and | means ‘given’, so the formula above is rendered in English as

The probability is given by the Poisson distribution, as it was when we thought we knew the long-term frequency. 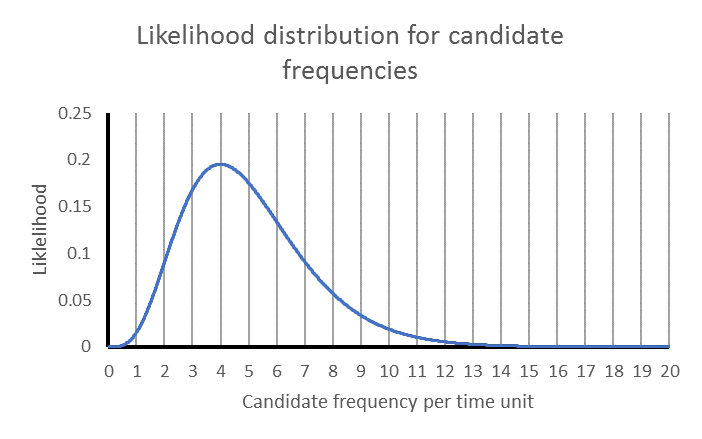 Likelihood distribution for candidate long-term frequencies over the range 0 to 20, where there is a history of exactly 4 events in 1 time unit. Candidate frequencies above 20 per time unit have non-zero likelihood, just as it is barely possible to have 20 or more events in a time unit if the long-term average is 4.

If your history of events is spread over multiple time units, you can define the likelihood of a candidate frequency per time unit as:

Here * means multiplication, as it does in Excel. 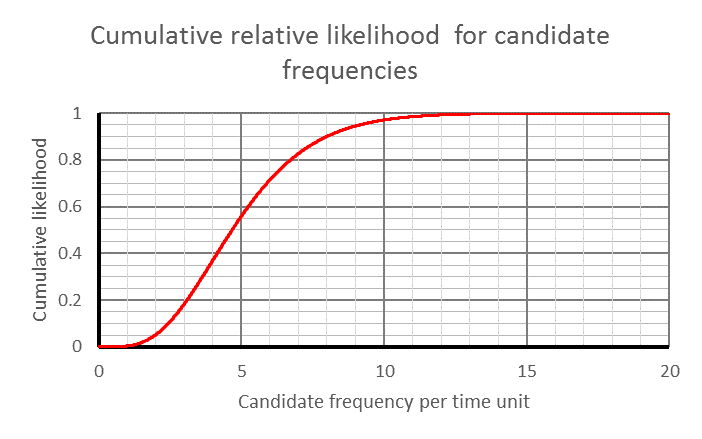 You can plot your own likelihood functions to see what they look like, with candidate frequencies on the horizontal axis and likelihood on the vertical. The scale on the vertical axis is not important. The plot will peak at the average frequency over the known history, and there will be a tail out to the right. If the history contains an absolutely high number (>20) of events, regardless of duration, the peak will be narrow, and the visible tail will be short. If the history contains few events, regardless of duration, the peak will be wide and the tail long. Zero is a legitimate number of events in the history. 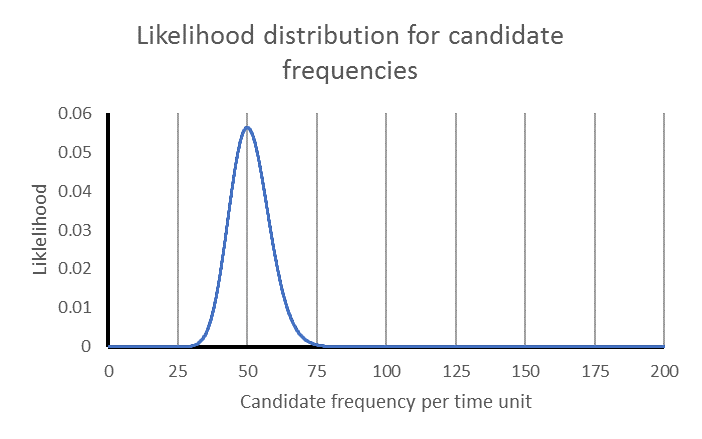 Likelihood distribution for candidate long-term frequencies over the range 0 to 200, where there is a history of exactly 50 events in 1 time unit. The plausible range for frequencies is relatively narrow and symmetrical, compared with the same graph for 4 events in the history.

In the second stage, there are thousands of trials, each one representing a potential scenario for the future prediction interval.

After those two selections, each trial produces an event count.

Both selections in each trial are random, but not from a uniform or undefined distribution. Both are taken according to a well-defined non-uniform distribution.

So here are the charts. 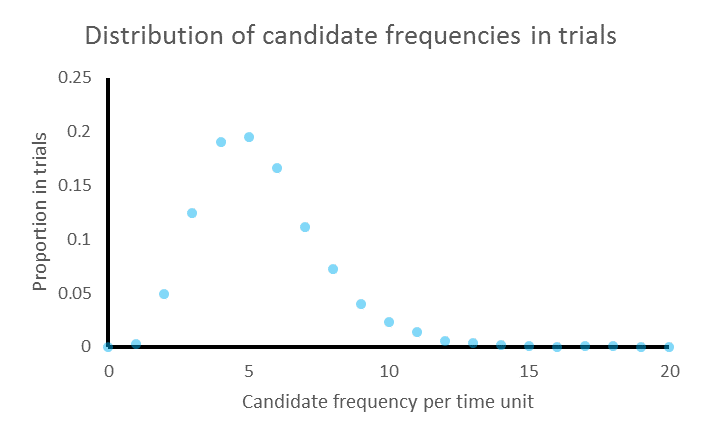 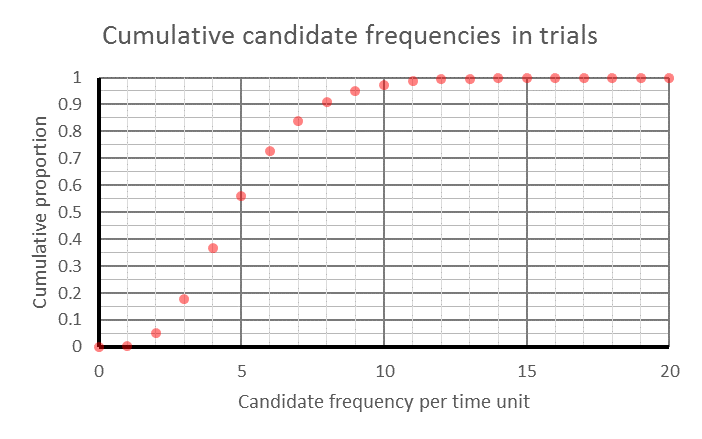 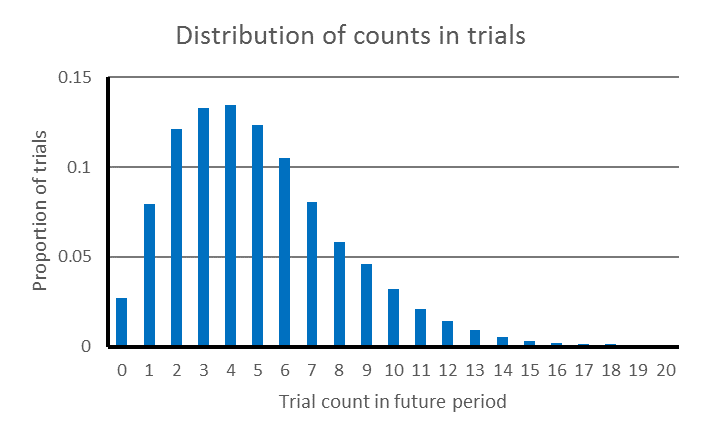 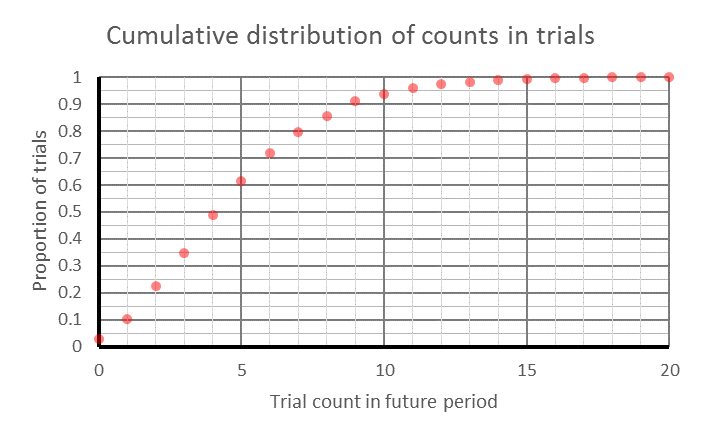 A typical cumulative distribution of event counts generated in Monte Carlo trials, for a future period of one time unit, given a historical period of one time unit containing 4 events. Each dot represents the proportion of all trials (vertical axis) with a trial event count equal or lower than the candidate frequency on the horizontal axis. The distribution should follow closely the cumulative distribution of candidate long-term frequencies chosen in trials, with some random noise. 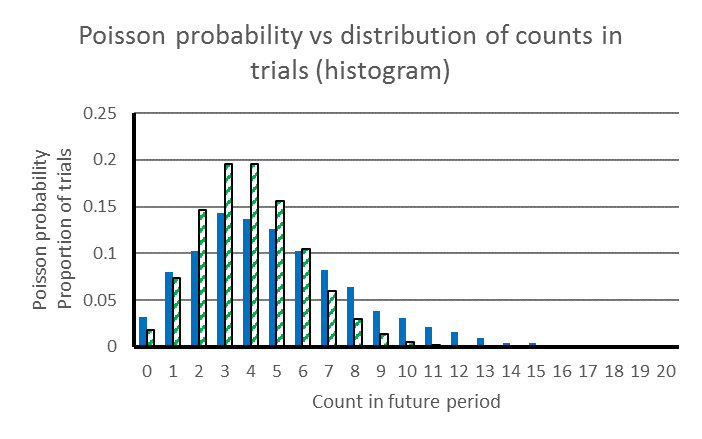 In the third stage you specify the event count range of interest, and get the likelihood (relative frequency) of future interval event count within that range.

You can also use the method to find the count range within which a given proportion of possible futures will land. For example, you can find the narrowest count range starting at zero within which 95% of all trial counts land. That count range represents something like a 95% Value at Risk [VAR], if you were to take the ‘count’ as a substitute for ‘value’.

Conclusions you may draw

When you try some different scenarios, you will see what you guessed all along. Whatever the long-term frequency of events, your predictions will be more concentrated in a likely range when you know about a lot of those events, over any historical period. If you have only a small number of events to go on (or even none), the trial results will spread out over a wide range of possible future event counts. You can try this by comparing the distribution of future interval counts for the cases in this table.

The rate of events within the history is the same (4 per time unit), but you have much less confidence and precision in your estimate for the future when there is just one event in the history (Case D) than when there are 40 (Case B), or when you just knew the long-term frequency to be 4 per time unit (Case A).

You may also want to explore the pattern of future event counts when you have 0 events in your history, but varying amounts of that uneventful history.

Those likelihood were calculated from an assumed long-term event frequency of 15 per year.

But then suppose that the frequency is not known, but is inferred from a short history, containing 5 such injuries in 4 months. The indicated frequency is still 15 per year, but that frequency is surrounded by uncertainty. The method in this article can be used to take the uncertainty into account.

After taking the uncertainty of the long-term frequency into account, the likelihood of a disappointing or bad outcome is over 18%, not below 1%, as it was when an injury frequency was assumed.

In many organisations a 1% likelihood of a disappointing outcome would be acceptable, but an 18% likelihood of such an outcome would not be acceptable. The enterprise would then make a different decision about accepting or treating the risk. The different decision would be based on having more or less information. The risky stairs themselves do not change. 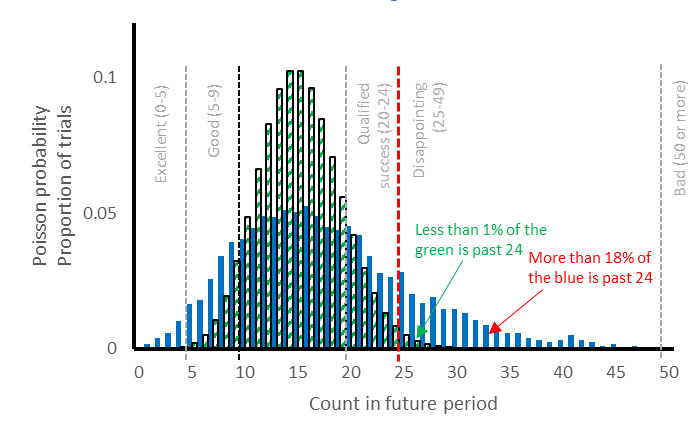 The striped green bars show the Poisson distribution of next year’s minor injury counts based on an assumption of 15 per year. The solid blue bars show the distribution of counts based on trials inferring a long-term frequency from a history of 5 injuries in 4 months. The areas where solid blue stands taller than striped green represent the increase in risk resulting from uncertainty. The vertical lines correspond to boundaries between consequence levels for the enterprise.

Map of the series

The Wikipedia page for Poisson distribution, under the heading Confidence interval, shows a credible formula for the confidence interval for a long-term frequency, based on a known count in a known historical period. My Monte Carlo trials aligned roughly with the predictions of that formula. The difference was that my Monte Carlo spreadsheet trials consistently produced fewer candidate frequencies below the lower end of the confidence interval than would be predicted by the formula. There was no such discrepancy at the high end of the interval.

With some Googling I found a concise and apparently understandable formula for a prediction interval in Luko and Neubauer (2014), properly called the ‘normal approximation’. The formula is labelled (2) on page 14. The original source may have been Hahn and Meeker (1991). However, the formula is an approximation that can produce crazy results outside of its comfort zone. In a later edition, Hahn Meeker & Escobar (2017) advised that

The normal-approximate method [repeated by Luko and Neubauer (2014)] requires that [the number of historical events and the forecast count for the future period] both be 30 or larger for the coverage probabilities to be reliably close to the…confidence level. (7.6.5).

Regardless of the limits of the approximation, when I applied the formula to the example in the Luko and Neubauer article, my answer did not match theirs. To match theirs (exactly) I omitted the Z factor (1.96 for α=0.05) entirely, and thereby assumed it was unity (corresponding to an absurdly high α). I did not see a correction in the next issue of ASTM Standardization News.

My Monte Carlo spreadsheet trials match the normal approximation—approximately, as expected. The proportion of trial counts inside the formula confidence interval was typically just below the expected 1-α. The exceptions were uneven, with ‘too few’ trials below the low end, and ‘too many’ above the high end. The problem is not the trials, it’s the approximate formula for the interval.

Luko, Stephen N. and Neubauer, Dean V (2014) Statistical Prediction Intervals: Applying the intervals to attribute data ASTM Standardization News, March-April 2014. This article references previous articles in the same journal in 2011, and the 2011 articles refer to authoritative sources, such as Hahn and Meeker (1991).

Next article for Specialists

Index to the series Repeatable events, frequency, and likelihood